With clearer signage, “dynamic” pricing, and technologically improved enforcement, the city’s transit department hopes to strip frustration and inefficiency from parking in New Haven and ensure that visitors and residents alike always have a place to park.

City transit chief Doug Hausladen made that pitch to commissioners of the New Haven Traffic Authority during their latest monthly meeting on the third floor of the police headquarters at 1 Union Ave.

Hausladen gave a 30-minute presentation summarizing the research, proposals, and goals put forth by the aldermanic Parking & Transportation Working Group, which was convened by the mayor and the president of the Board of Alders a year and a half ago to investigate parking concerns throughout the city. Hausladen served as staff for the working group.

Hausladen told the commissioners at the meeting this past Tuesday night that the two primary parking-related complaints the working group heard from the public involved the difficulty of finding available on-street parking downtown, and neighbor frustration with commuters, visitors, and employees parking on residential side streets. 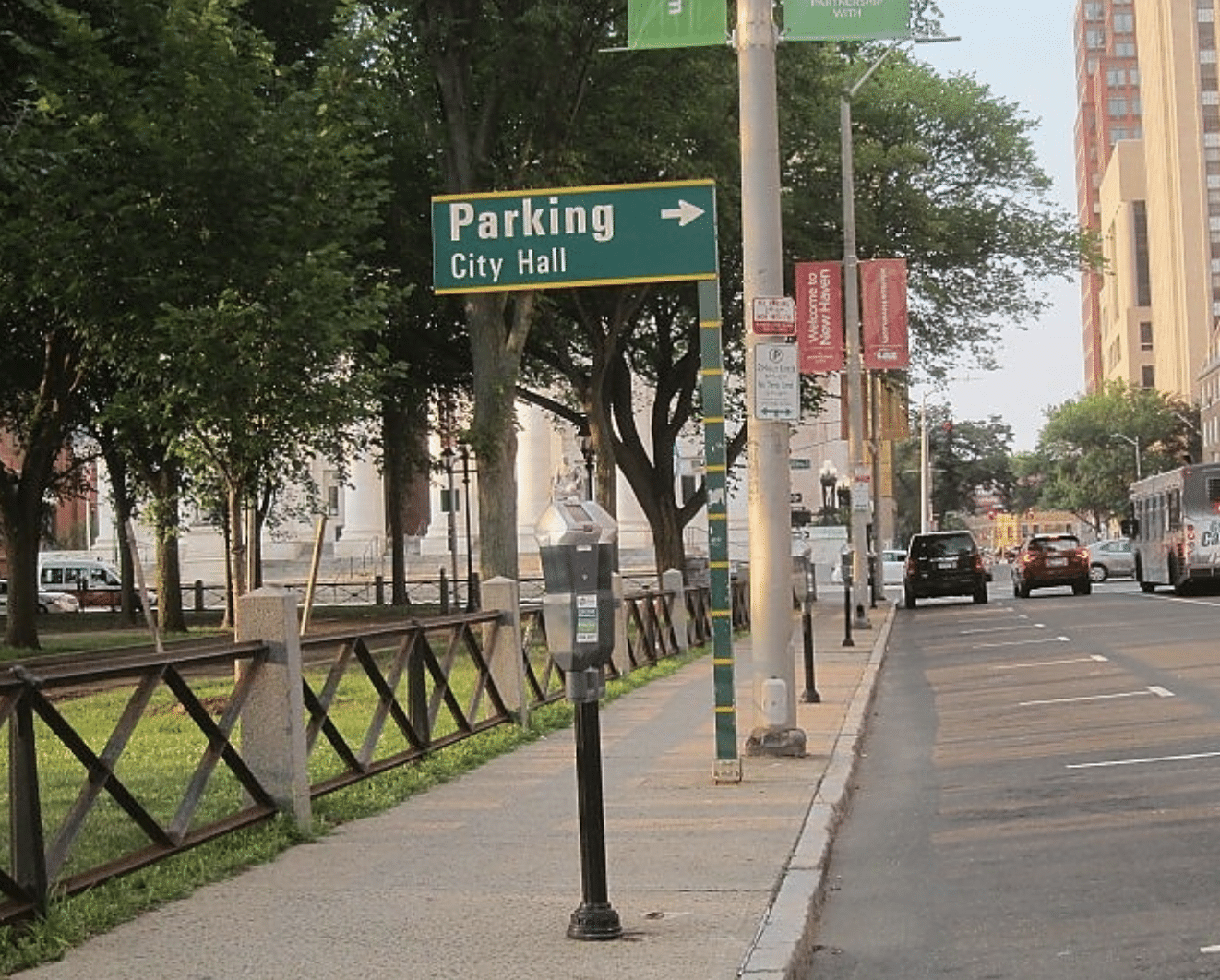 The commissioners voted to table the dynamic pricing parking pilot until next month’s meeting, when they will resume discussion and vote on whether or not to adopt it.

Rehashing many of the points that he and Hill Alder Dave Reyes, the chair of the working group, discussed during a recent public meeting about parking in the Hill, Hausladen told the commissioners that his department would like to introduce a pilot program starting in August or September. It would apply different prices to different on-street parking meters depending on location, time of day, and demand.

“For us, with all of the pricing being the same, not all of the destinations are the same,” Hausladen said about the city’s current on-street parking system. “We end up getting a lot of demand in certain areas of our city and less demand in other areas.”

For the pilot, Hausladen would like to adjust prices for parking meters by a “quarter every quarter,” or 25 cents every three months. High-in-demand spaces on Temple Street or Chapel Street downtown could cost as much as $2.25 per hour for peak hours from 11 a.m. to 9 p.m. Less popular spots could cost as low as $0.50 or $0.75 per hour.

“The hope is to get one or two parking spaces available on every city block,” Hausladen said. He said his department would like to see an 85 percent occupancy ratio, meaning at one or two available spaces per block. He said that cities that have implemented this type of dynamic pricing plan have seen large reductions in circling for parking, and subsequently large reductions in greenhouse gas emissions. The Hill, he noted, has the worst air quality of any neighborhood in the state.

Hausladen said that his department wants to model its pilot program off of the city of Seattle’s. “They’ve adjust rates four times,” he said, “and the fourth time, they didn’t make the news. That’s really the goal: to be background.”

But variable on-street parking prices are just one component of his department’s plan to move New Haven beyond its traditional conception of parking, Hausladen said.

He said “strategic wayfinding,” or improved signage that is clear and consistent and easy to read, will also contribute to better a better parking experience for residents and visitors alike.

Showing a picture of Berekely, Calif. Street sign with a giant “8” indicating the maximum number of parking hours allowed at a given space, Hausladen said he would like to see New Haven’s text-heavy parking signs switch to an easier-to-read design language.

“We’re trying to get away from what we use in our traffic signs,” he said, “which is a lot of words,” which can be confusing to someone squinting up from the sidewalk.

He also noted that the department plans to purchase license plate recognition software next fiscal year to better enforce residential parking permits, which he said residents are using much more frequently now that the department charges $0 for residents to acquire a permit for their given block.

“By reducing [the permit price] to zero,” he said, “we’ve seen a lot more people ask us to manage their parking. And for us, that’s everything. If we’re not managing your parking, we can’t help you have a good quality of life on your street.”

Hausladen listed the goals of the dynamic parking pilot, as well as of the “Beyond Parking” report more broadly, as reduced greenhouse gas emissions, less circling, increased economic vitality and safety, and reduced frustration.

“We want to have consistent availability,” Hausladen said, “so that when you come into New Haven, we’re going to have parking available for you.”

Commissioner Evelise Ribeiro asked Hausladen about the roll out of the pilot program: How long would it take to implement the dynamic pricing and new signage? Where would the variable prices be made visible?

Hausladen said the price for any given spot will always be visible on that spots meter. He said his department is also considering signs displaying one, two or three dollar signs, a la Yelp, to indicate what category of pricing a certain spot falls into.

“And this is just a three-year pilot?” asked commissioner Stephen Garcia.

Hausladen said three years should provide plenty of time to collect data on whether or not this pilot program is successful. He also said that his contract as city transit chief is only so long, and he’d rather not hamstring a successor if he or chooses to drop or significantly change the program.