Loveland, Ohio – City Manager Dave Kennedy is awaiting approval from the Ohio Department of Natural Resources (ODNR) before installing 39 test parking meters in Historic Downtown. The property where 26 of the meters are to be located is street parking along Railroad Avenue and the poles would be in the “right of way” controlled by ODNR along the Loveland Bike Trail.

The test meters would be on West Loveland Avenue, and Railroad Avenue from West Loveland to Harrison Avenue. Kennedy said he is waiting on a person from ODNR to return from vacation so they can continue their discussion of the right of way issue.

Kennedy is working exclusively with The IPS Group in a test of their meters before possibly installing more of the metered parking. When asked if he has an idea what the parking rate will be he said, “Not yet. I need to clear up right of way with ODNR for the pilot program.”

Kennedy said, “I should add that we hope that the pilot program helps us establish a reasonable parking rate. It is important that the rates of the parking meter find a balance between not having a negative impact on parking within the downtown district while also allowing the meters to effectively manage parking.”

In a June 26 memo to the Mayor and Council he said, “Having reviewed the products of multiple meter companies, the city has decided to work exclusively with the IPS Group due to their advanced technology, ease of enforcement, foolproof collections, and varying designs.” Kennedy also said, in the memo, “The IPS Group are leaders in the parking meter and kiosk field. The IPS meters are equipped with advanced technology, including mobile applications for the users, advanced enforcement, computerized reporting, and fail-safe collections.” There has been no discussion of penalties for violations. 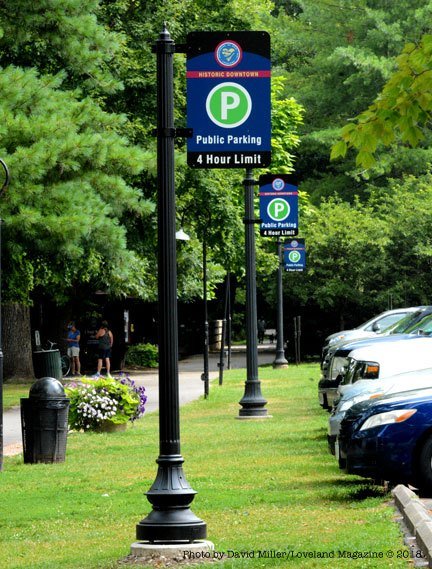 “The initial installation is only a pilot program at no cost to the city to determine operational, collections, and enforcement needs,” said Kennedy.

It is a goal of Council to increase parking turnover in the Historic District and discourage long-term parking in prime retail spots by users of the Loveland Bike Trail. The City would rather bike trail users park in the Linda J. Cox Trailside Parking Area on East Broadway.

Kennedy said that IPS meters are the industry leaders due to multiple features, most notably applications which allow the users many ways to pay, including through their mobile devices.

The meters will be solar powered and managed by the City through a wireless networked data management system. The City Manager said the meters will be easy to maintain and displays a clear violation indication for enforcement. He said the system includes a “failsafe” collection system.

The design of the meters would include one pole for each two meters, which Kennedy said would reduce obstructions along city curbs and would be black in color to match other city sidewalk components.

If the pilot program is successful, Kennedy has presented a plan where there might be anywhere from 27-110 permanent meters and an estimated cost between $32,599 and $124,125.