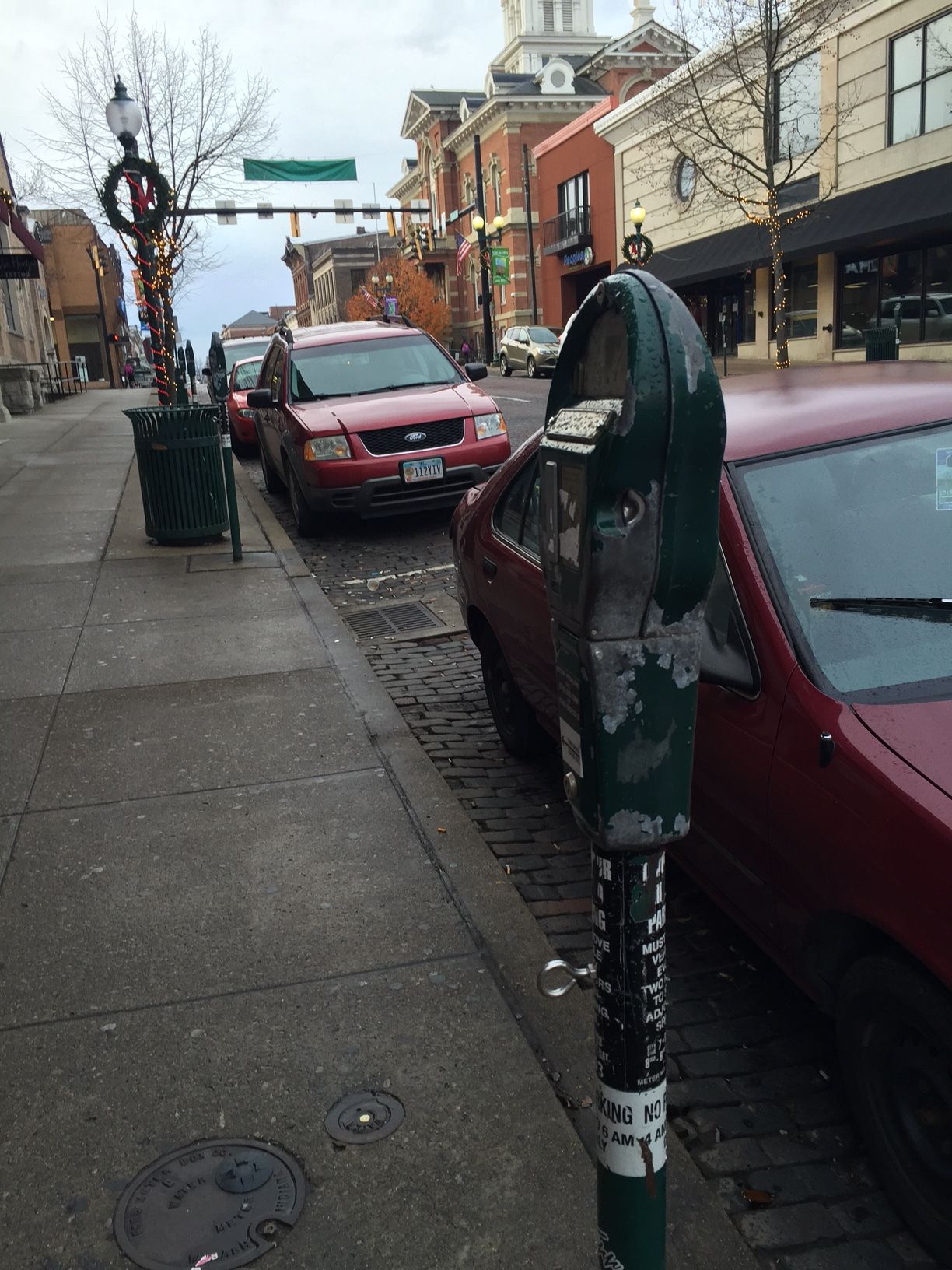 The new meters would be accompanied by higher parking fees and expanded hours for payment, as well as changes in parking zones.

Athens City Planner Paul Logue and Deputy Service-Safety Director Ron Lucas gave a presentation on the Uptown Parking Study during City Council’s Planning and Development Committee meeting Monday evening. Logue said at the meeting that the study began early in the process of updating the city’s comprehensive plan and involved significant data collection on the part of city employees.

The study gleaned data through a pilot program that tested “smart” parking meters on sections of Court Street and payment kiosks in the City Parking Garage from February to May of this year. IPS Group, headquartered in San Diego, had agreed to install the meters for the pilot free of charge so the city could test them. The high-tech smart meters accept credit and debit cards, as well as coins and payments made via parking apps.

Logue said the study also incorporated interviews with uptown business owners, online surveys, and “block-to-block, parking-space-by-parking-space counts to better understand how traffic moved and how cars moved through each space during our peak time,” Logue said, adding that peak parking hours were found to be between 10 a.m. and 2 p.m. on weekdays.

“We took clipboards and pens and pencils… and we started walking uptown Athens, and we surveyed every parking space every half hour for a four-hour window,” Logue said. “… We wrote down the last five digits or four digits of license plates so we could see where (cars) moved to, how often they were staying, and how often parking spaces were available.”

Using the data collected during that process, the study resulted in several recommendations to the city, most notably the need to accept multiple payment options at parking meters.

Frustrations about parking enforcement in the evening were also noted in the study. People who work uptown in the evening tend to use on-street parking spaces more in th

e evening because the meters are free after 6 p.m., which hurts businesses.

“Customers don’t want to come uptown because they assume that there’s no parking,” Logue said. “Part of our strategy is to open up and rotate parking so that we can support our uptown businesses.”

Deputy Service-Safety Director Lucas said at the meeting that “the purpose of on-street parking meters is to cycle parking effectively in order to support local businesses,” and asserted that the installation of smart meters could help achieve that goal.

The smart meters are solar powered and offer a variety of features beyond accepting credit cards. The meters have vehicle-detection sensors that detect when a car has moved into or out of a space; they offer mobile and in-vehicle payment options; they come equipped with data-management tools for parking-enforcement officers, and offer lots of other optional features that the city could request.

The IPS meters offer one platform that parking-enforcement officers could use to check meters, Lucas explained, where currently officers have to juggle multiple platforms to determine if someone has paid for a space. Currently, residents may pay using coins or the Park Mobile app, and parking-enforcement officers have to figure out what method someone used.

“With a smart meter it’s all in one,” Lucas said.

The smart meters also have LED screens that change color: red if a space is available and green if the spot is taken, according to Lucas. “That lets parking enforcement know that it’s legal,” he said. “It also lets a person driving a vehicle know that that parking meter is taken.”

Meters also can display parking-enforcement messages to let people know if certain meters are closed for an event, for instance.

IPS also offers its own payment app for customers to use with the smart meters that would not charge a transaction fee, unlike Park Mobile, which charges 35 cents per transaction. If someone adds 50 cents to a meter using Park Mobile and adds another 50 cents later, that person would pay two transaction fees.

“So instead of paying $1 for my time, I ended up paying $1.70,” Lucas explained. “That’s significant.” The city would encumber some additional charges with that feature, Lucas said.

The pilot program showed that smart meters generated over $1,000 more than the traditional meters, with $5,360 gleaned from card revenue alone.

Lucas and Logue recommended in their presentation that the city order 525 smart meters. The city would pay $443,667 to purchase the meters and pay for dome sensors, batteries, meter installation, coin collection carts and coin canisters. Three leasing options are also available at a rate of $4,487 per month for 36, 48 or 60 months, with the total costs depreciating for longer monthly commitments.

Projected revenue from the new meters is $1,397,244 per year, according to the presentation, while current meter revenue is about $750,000 per year. Estimates showed that revenue from parking tickets actually would decrease with the improved enforcement from the smart meters, with the additional revenue coming from more people paying more to park during a longer day when the meters are requiring payment.

date language to include roadways and streets.

• Add language to allow the fire chief to require a fire lane during street festivals or events.

nes (which do not currently exists) 25 cents per 10-minute period. Intensity zones would be color-coded, Lucas said.

Mayor Steve Patterson noted at the meeting that “some things are not included in this” study, in response to council member Pat McGee’s question of whether the vendor parking spaces were taken into account and how the smart meters might influence vendor parking payment options. Patterson said vendor spaces, loading-zone spaces and other things were not considered.

City Council would need to pass two ordinances—one to authorize the purchase of smart meters and another to make the appropriate changes to the city code. If approved, installation of the meters would occur in December during Ohio University’s winter break, and the new meter rates would take effect Jan. 1, 2019.