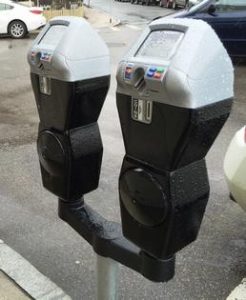 Those fed up with Medford’s year-old parking kiosks might soon have reason to celebrate.

Mayor Stephanie M. Burke said the city is considering replacing at least some of the digital kiosks with single-head meters.

During an interview with the Transcript last week, Burke said city personnel have been meeting with officials from Republic Parking since January to review year one of the city’s pay-to-park program and discuss potential changes.

One option under review, Burke said, is removing some of the 82 kiosks placed throughout the city in favor of meters, of which there are currently 12.

The kiosks have caused widespread frustration since the program’s January 2015 launch. A February Transcript report on the program’s first year found that owners of all types of businesses in each of the city’s five commercial districts agreed the kiosks were difficult to use.

“A lot of the kiosks at times are really not working properly,” said Charlotte Scuderi, president of the Medford Chamber of Commerce. “You can’t see them because of the sun. Or the money doesn’t go in no matter how many times you try. So there are problems.”

Last month, Burke said potential changes to the pay-to-park program included offering a preloadable parking card, reintroducing the “ambassador program” to teach visitors how to use the kiosks and setting up accounts for business owners allowing them to add time to a customer’s space.

Eliminating the kiosks altogether was not considered an option for the city, which would owe Republic between $800,000 and $1 million to remove the kiosks.

But Burke said she planned to meet with chamber representatives soon to discuss whether the group wanted to replace some kiosks using the $250,000 in annual funding promised to the chamber by former Mayor Michael J. McGlynn, who signed a 10-year contract with Republic in October 2014.

“I would love to see parking meters [instead of kiosks],” Scuderi said last month. “I think that’s the biggest objection. If you could feed the meter, you’d probably be better off.”

Switching out some kiosks for meters would likely be a popular move among business owners and residents — especially after the city’s botched rollout of the pay-to-park program last winter, when the city sent a series of conflicting messages that led to confusion about the date on which the new kiosks and meters would “go live.”

Republic and the city then made constant changes to the program in its first few months, including revised time limits and new signage. Throughout year one, patrons expressed frustration over difficulty securing permits and resolving ticket disputes with Republic.

“It just seems like it’s not really working right now,” said Sharon Hepburn, owner of Mystic Coffee Roaster in Medford Square. “But I certainly wouldn’t want to go back to [no enforcement]. I think the mayor or somebody really needs to talk to them and figure it out.”

After meeting with Republic officials over two months to evaluate the program, Burke plans to announce changes soon.