Knoxville parking meters to be updated 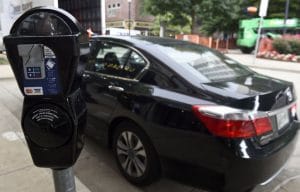 More than 1,000 outdated parking meters in the Knoxville will be replaced by solar-powered units across downtown, the Old City and Fort Sanders after City Council members approved a contract Tuesday night.

“Mostly we’re trying to replace some obsolete equipment that’s in really bad shape, and get us into the 21st century,” Jim Hagerman, Knoxville’s engineering director, said.

Contractor IPS Group will handle the work of replacing 1,022 meters for $999,981, according to the contract approved by a resolution during Tuesday’s council meeting.

Hagerman said the meters will also replace kiosks for parking in the 100 block of Gay Street. Like the kiosks, the new meters will accept payments via credit card.

“One of the big reasons that we went to the multi-space kiosks in the first place is that it was one of the only ways we could get a credit card system,” Hagerman said.

He added that people took issue with walking to and from their cars for the kiosk system, and that the machines broke down at times. The old coin-operated parking meters also are failing, Hagerman said.

The single-space parking meters have been in use for 20 years in some places, Hagerman said, which was well past the life expectancy. The new ones should last 10-15 years, he said.

Replacement meters are expected to be installed in the next six months.

Vice Mayor Duane Grieve asked how much money parking meters currently generate, which is roughly $300,000 a year, according to Jim York, the city’s finance director.

He said that staff members are researching whether to change parking meter rates.

New meters could pop up in places in downtown Knoxville where they’re not currently used. Hagerman said if that were to happen, it would need to come through a separate action by City Council.